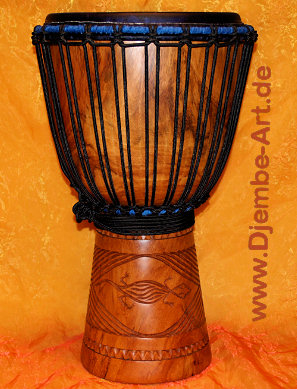 Absolutely essential and often totally underestimated is the quality of the tone wood used for drum making. The sound is created not only by the vibrations of the drumhead membrane and the associated stimulation of the airspace in the drum. The entire wooden shell vibrates itself and it reflects soundwaves from its surface at the same time. The harder the wood, the stronger the reflection. The softer, the more sound energy is absorbed. This does not only effect the volume of a drum, but also the entire sound quality. Each tonewood has its own characteristics that a professional drum maker uses to create a specific sound.

Within one single species there can also be major differences, relating on in which earea the tree was growing and what conditions such as temperature, light, water and nutrients were available. The quality also differs depending on from which segment of the tree trunk the drum was carved. Lower parts are generally heavier and darker and higher parts are lighter. On some timbers, such as African Rosewood, you can even detect very distinct color differences between the lower and upper areas. At the base of the tree the wood is very dark and can be almost black in color. The top of the same tree can be as bright as honey so that you can hardly believe that this is the same tree. Finally I would like point out that most timber segments from Westafrican trees have distinctive zones. In the middle you find the darker and harder core which is known as heartwood, followed by the very much brighter coloured and softer so called sapwood. The sound difference is tremendous. The more heartwood you use for making a drum the fuller and richer the resulting sound is. African wood from climate zones around the equatorial belt have a decisive advantage over European timbers. They have no annual rings, because there is no winter rest period for the growing tree. For this reason most African timbers have much less tendencies for cracking.

The worlds most important Djembe timbers:


Comment on YOUTUBE< 21.12.2013 from Alan Tauber, USA I have seen this over and over again, in Guinea. Depending on my mood I guess, I get so upset sometimes. I KNOW how hard they all work. Days and weeks and months to build a drum. And it gets heated in tin shacks for maybe years till they cure and the water goes out. The drums get transported here and there and back again. Then maybe some decoration for looks and the rings are made for each drum. Welding takes place when there is electricity. They have to get decent rope which is another whole story. NOT EASY. None of it.

And what can they get paid? Not much Im afraid. Probably comes out to 5 cents US per hour. These drums should cost at least $2,000.00 US and the carvers and their families should be taken care of. But, instead, people come to my shop, whether they see my videos of carving or this one and they still want a discount. I am very sad right now. How can we change this? It kills me to watch this. And thanks for making this video and posting for all to see.

>Answer on YOUTUBE< 22.12.2013 von Gavin Grosvenor Dear Alan Thank you for your precious comment. You are right, well made full size hardwood Drums totally made in the US or Europe would have to cost close to 2000 € / $ due to the many hours of workmanship + material costs for quality wood, skin, ropes and rings etc. Wages in Africa are generally far away from European and American standards. Your comment of 5 ct per hour seems to be impossible, but we are not surprised that such practices still exist in Africa. How could it be possible otherwise, to see full size Djembes advertised at dumping prices under 100 € /$ on the European and USA markets? - by paying workers extremely low wages - by avoiding to pay taxes and social security in Africa - by wild cut trees, without government permits and here again no taxes - by avoiding correct customs declarations during imports.

To lay it open, we see that they our workers are paid around 10 $ per day, this is at least three times more than a usual Djembe worker earns in Africa, and lightyears away from the 5 ct workers, + they get a warm meal per day, fresh drinking water, and they have access to decent showers and toilets. We feel this is only fair due to their excellent workmanship and the outstanding quality that they produce for our company Djembé Art. Through this we have built a long term relationship ensuring very strong reliability, loyalty, job satisfaction and high motivation to continue, resulting in a very high level of constant quality. These workers are proud to work for us and call the Djembes that they make for Djembé Art their babies.

In Germany there is a so called “Geiz ist Geil” mentality, meaning “greed is great”. This has flooded the Djembe market with Tweneboa softwood Djembes from Ghana and Asian machine made dumping quality, that are mainly suited for decoration use only, easy to be found on auction platform etc.. If you see those low price drums being advertised and called the highest Master-class quality, than you know where our “greed is great” mentality has led us to. We believe that fairness and honesty is the reason for our success and we will continue to work that way even if we can’t offer the cheapest drums because of all that. We can only change the vicious circle of dumping price instruments by educating people, so that they learn to appreciate and know what it means to have a real African handmade drum. With kind regards and all my respect: Gavin Grosvenor

The countries of Djembe origin


During the last 20 years we were able to promote an increased awareness for of quality amoungst Djembe makers.